It had been a long time in discussion. Dates came and went with all manner of reasons and excuses. Finally after reading about "THE #MICROADVENTURE 2013 CHALLENGE" commitment was made, days were booked off work and the proper planning began.

The first choice was the location and Crickhowell became an early front runner due to having a route over Crug Mawr that had been aborted 3 times due to mechanical or weather based problems. As the days went on though the weather didn't look like it was going to be great so a back up location of Church Stretton was also decided upon so that we could go where the weather might be kindest. 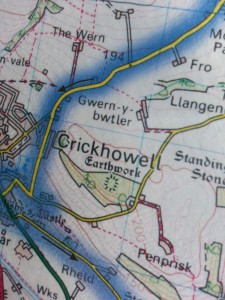 Not all the preparation was well timed, deciding to fit a front mech to my bike and a small chain ring the night before wasn't allowing much room for error! Thankfully this bit of late maintenance worked fine and the small chain ring was a blessed relief on some of the steep Welsh lanes.

Packing the car was like a game of Tetris, trying to fit 3 bikes kit and people in was a challenge we were more than a match for. After a stop for sustenance and "hydration" we set off on the 90min drive to mid Wales. 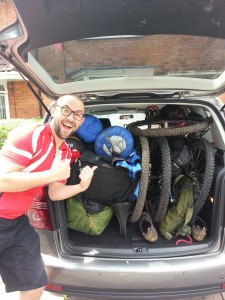 For once the weather gods were shining and we were greeted with some blue sky, sun and fluffy clouds. The excitement was building as we loaded up the bikes and made some last minute decisions. 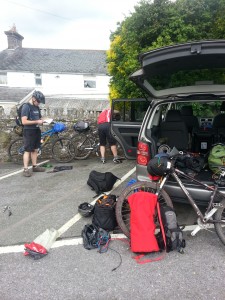 Getting the bikes set up[/caption]

The map was checked once more to make sure we were heading off in the right direction and we set off to Llanbedr, this was just a few miles to make sure things stayed attached to bikes and give us an ideal opportunity for a pint of ale in the now quite warm Friday afternoon sun.

Everything was going smoothly, almost too smoothly... after a few miles of steep lanes we arrived at the Red Lion, it was closed till 7pm.. doh! It was only 4.15pm so we elected to search the map for an alternative beer stop. A few more miles and we were pretty much back where we started though one upside is that we could pass the car again to pick up some forgotten medication.

We pushed on back to Llanbedr and finished our mini loop at the Red Lion, we tucked into some food including a pretty special syrup sponge before heading off to the bivvy spot near the summit of Crug Mawr. 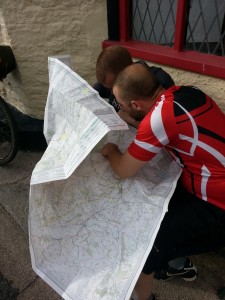 Some of the lanes were ridiculously steep and no matter of leaning forward or changing body position would keep the front wheel down so some pushing ensued, as the light started to fade a little we took a turn off the paths only a bridleway which led to the summit.

It was now that the light actually started to go pretty quickly and we were lucky to make it to the summit and find a bivvy spot with minutes until the head torches needed to be put on. 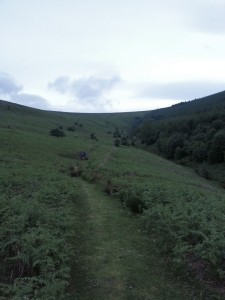 the trail up to the top of the hill[/caption]

It was a fair bit windier up on the mountain than the safe confines of the car park so we set up a tarp to shield us from the prevailing wind a little and hunkered down with some red wine and chocolate, it never tasted so good!  The night passed without incident and sadly also without any clear skies, I bet the stars would have been amazing with no light pollution at all. 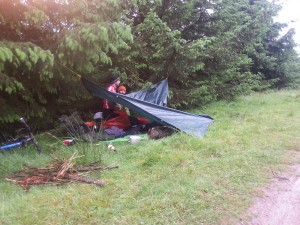 The morning greeted us with a shift in the weather. Strong winds and rain meant we had to escape the relative snugness of the bivvy bags and make our way back to civilisation. 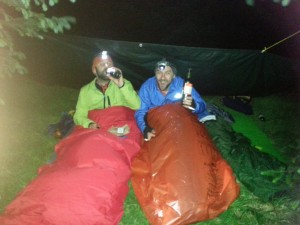 We were really looking forward to the bridleway off the mountain, 20 odd minutes of descending as the path skirts round the mountain. Unfortunately amongst the horizontal rain and wind that meant you could hardly hear one another we elected not to check the map and took a "left or right" choice at a fork in the bridleway. 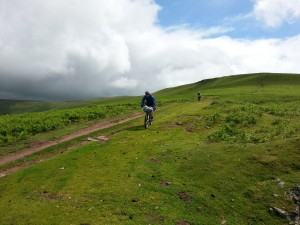 Back on track, what a great trail off the mountain[/caption]

Checking the map would have saved us 2 hours of pushing bikes trying to refined the trail and get off the mountain. Things were a little bit sucky at this point with energy a bit low and the conditions just bad enough to give you a little bit of fear. 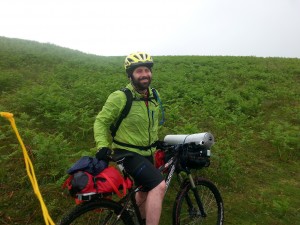 Super relieved to not be pushing endlessly through heather![/caption]

Eventually we made it back onto the correct path and with some relief headed down the mountain. I realised at this point that my choice of budget seat post rack was a false economy, it really wasn't up to the task in hand where as Stu's Carradice performed faultlessly... one for the shopping list.

After a final push along  the lanes we arrived back in the car park slightly weather beaten but with smiles on our faces.

I for one am a #microadventure convert and we are busy planning the next adventure!

As it was our first micro adventure there were things we would or wouldn't do again...

The bivvy bag, sleeping mat, cooking pans, food and tarpaulin went into the Carradice
Sleeping bag was put into a drybag and tied on with bungee cords to the handlebars.
Any remaining kit was stuffed into the Camelbak.

Getting Started with Responsive Design

And that is why you don't want to spend too much time swimming and snorkelling!