And that is why you don't want to spend too much time swimming and snorkelling!

It had been such a fun holiday, blue skies, hot sunny days and lovely balmy evenings. We had been snorkelling every day, learning where the best spots were at our local beach and a couple of spots further afield.

We made plans for the last day, a kayaking trip across the bay to an island that we had heard was a beach turtles lay eggs on. After seeing one on one of our morning swims we were keen to get over and see what it was like.

I wasn't quite prepared for what followed when I woke up in the middle of the night.

At first I presumed I had maybe had a glass of wine too many, that familiar dizzy feeling accompanied by slight nausea. Better nip to the toilet, I am going to be the butt of the jokes tomorrow if I am sick I thought. Suddenly though I was lying on the cold marble floor, things were spinning like I had been strapped to a waltzer for a while, a feeling I became accustomed to over the following 6 hours. 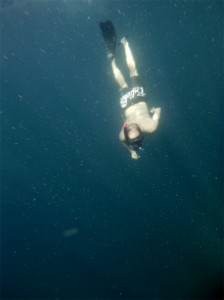 By daylight I had spent the whole night crawling around the apartment, unable to stand and vomiting every 15 minutes or so, this was not how I intended to spend the last day of our Greek holiday!

Thankfully my wife's father and my brother in law were at hand and after a quick discussion it was decided to try and get me to a hospital about 25 minutes away. The main task now was how I was going to get from foetus position on a bed down to our hire car and survive the twisty drive to Pilos hospital. Sometimes you need to just go and find a special place inside you, it always amazes me what the human body and mind can achieve when push comes to shove.

We made it to the hospital with relative ease and soon I had been led into the A & E Department and was seen quite promptly. Despite my disturbed vision and confusion I could tell that the place made the NHS hospitals I have been to in the UK look positively luxurious.

We did our best to answer the questions the doctors asked just as they did their best to understand our responses, it was hard work though.

They said they could only treat my symptoms, not the cause and so a prescription was written and my brother in law was sent off for some anti dizzyness pills whilst I lay in a room with a couple of other patients. 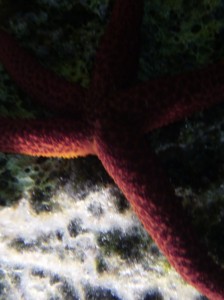 A couple of failed cardiograms using antiquated equipment later, a nurse entered and motioned to me to roll over, she was holding a syringe, evidently it had a meeting booked with my butt!

A rush of adrenaline helped to bring the relentless spinning into focus and I managed to decline the joys of an unknown injection until someone explained what it was for. Eventually the main doctor confirmed it was an anti vomiting injection, I was pretty happy to roll over and receive what turned out to be blessed relief.

I had had enough by now, I couldn't really work out what would happen if I missed my flight the next day, it was something that I couldn't let happen so when there was a quiet moment I suggested to my brother in law that we make an escape, I was soon being wheeled through the wards and got back into our car. Twenty minutes later I was at the relative safety of the villa and lay there wondering what the hell had just happened.

It turned out I had suffered a vertigo attack, something many people will experience in their lives. I had always associated it with a fear of heights, probably because of the Hitchcock film but it was actually most likely triggered by an inner ear infection from a virus and/or the snorkelling.

We made it home to Gatwick the next day, a very wobbly and confusing journey which, once again I was very thankful to have family around to assist me. 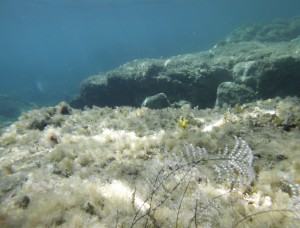 It took nearly two weeks to get to the point I could drive again properly but even 4 weeks on I can still feel the effects on my balance and spatial awareness meaning running or cycling is a struggle. A bit of internet research /doctors appointment suggests it could take a few months to get back to normal.

In the meantime though I still have our holiday snaps to go through and a autumn equinox #microadventure to plan, just gotta hope I am back to normal by then!